Interview by Bojana Bejatovic
WGM Elena Tomilova is the winner of the ACP-ChessBase Women’s KO Event. At first, she didn’t want to participate at the tournament but she was persuaded by her husband, GM Dmitry Kryakvin to prepare and to give it a try.
In the 1st Round she won against Arakhamia-Grant 2.5-0.5, but maybe the biggest surprise was in the second round, where we saw 3-0 against Stefanova.

BB: Well, first, our congratulations on winning the ACP-ChessBase Women’s KO Event! How do you feel?
ET: – I have so many emotions, I can’t believe that I have won!
How was your preparation for the event? Was this your first online chess event or have you participated in other online chess events (Titled Tuesday, FIDE Checkmate Coronavirus, or similar)?
I played on lichess and chess.com training games, took part in the European rapid online championship and Women Speed Chess.
If you look at the games, I prepared for each match. I played my openings, but somewhere I had some fresh ideas. The most difficult match was against Stefanova. But maybe my lower rating played in my favor – it’s always nice to start with number 9.
Of course, number 9 is considered as a divine number, so I agree :)
In the games against GM Stefanova, we saw great fight, except in the third game where there was a mouse-slip in the very beginning by Stefanova (2.g4 instead of 2.g3).
In the second game of that match (Slav Defense: Modern Line), there was an interesting opportunity with 16…Bxe4 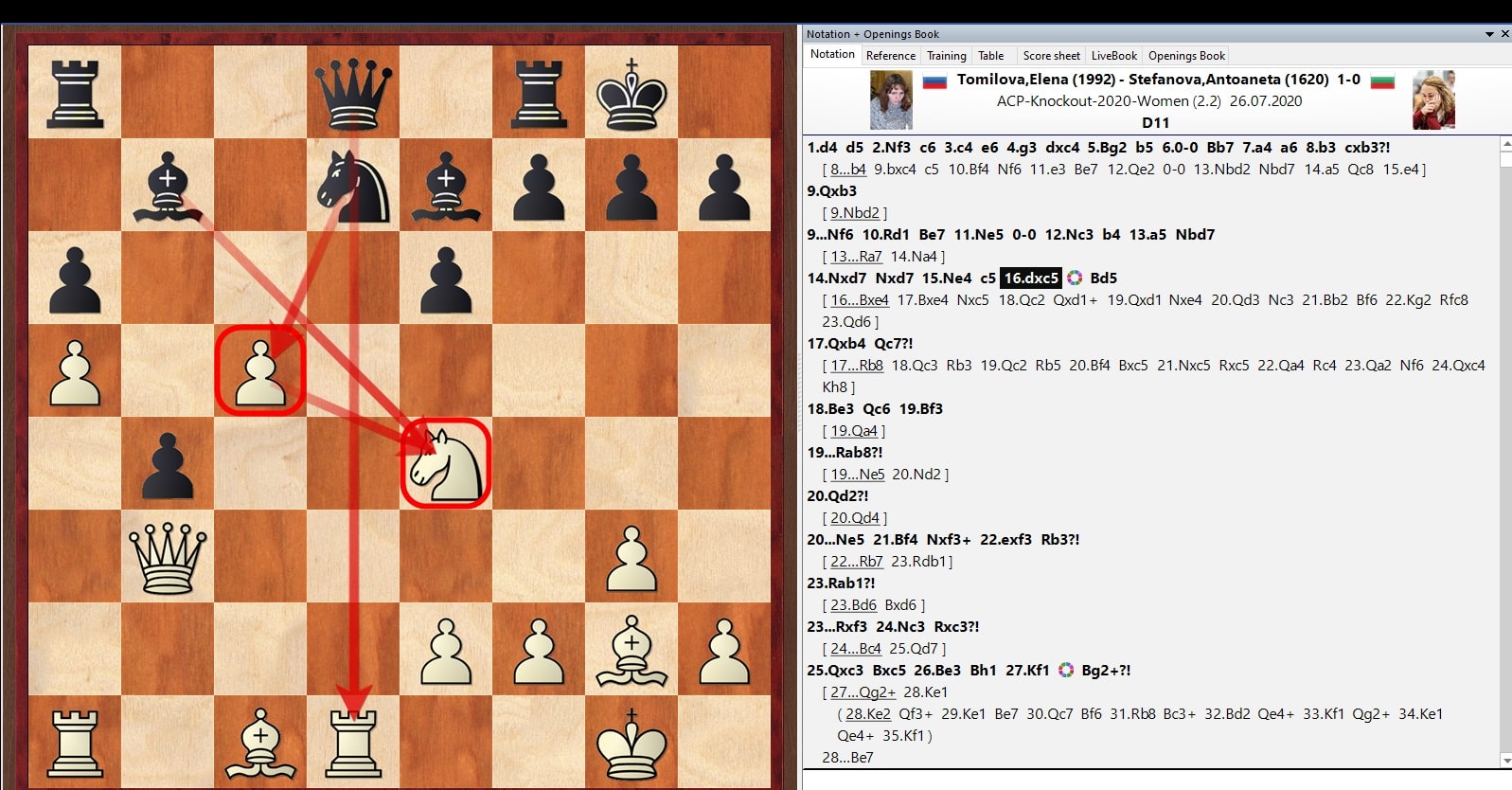 with the following position
BB: How do you feel about this position, did you see it during the game and if yes, what was your next plan in this position?
ET: Fantastic! No, I didn't see this option, because the queen is my favorite piece!
In the game, there was a draw with 27…Qg2+ , but Stefanova played 27…Bg2+ instead.
In the third game of the Finals, against Bodnaruk, we saw many twists that came out of the Steinitz Variation in the French Defense, and a missed win in the rook endgame by 68…Rb4!
In the final one we have the same decisive moment connected with the g5 square as in the second game against Bulmaga (King’s Indian Attack) where we saw a creative idea with 23.Ng5, with Bxd5 and e6 following in the next moves, but the Black pieces are perfectly placed and White’s king is unsafe.
Bulmaga- Tomilova

19 ... Rxg5 is a decisive mistake.
21.d6! comes very strong.
The ending is also notable – we see again the Queen's sacrifice for the rook and the pawn advance  (31. Qxe8 and d7), as in the second game against Bulmaga (33…Qxg1 and f2+).
ET: Here is such a mystique of coincidences! Bad moves on the g5 square and the Queen's sacrifice for a passing pawn! I have solved a lot of tactics - and there's the same theme of combinations.
What do you think of these online events compared to the regular OTB tournaments? Which one do you enjoy more, and what/how is the psychological aspect behind OTB and an online game?
I prefer regular tournaments at the board, but it's great to have online tournaments at this time of pandemic. Sometimes there are so many of them that you can't take part in all of them. I like to play with Zoom, because I see the face of the opponent, her emotions, and watch the reaction - blind it or a trap. It's a bit like playing OTB.
The organization of the tournament is normal, although there were problems for the participants and sometimes, this decided the outcome of the match.
For example, my first qualifying match against Arakhamia-Grant, Ketevan, a connection break knocked her out of the program and I got a point.
If I had been knocked out in that match, maybe she would have moved on in the next stage. Pia Cramling had a similar situation – so after such “gifts”, Anastasia and I made it to the final.
It was unusual to play on the playchess platform, but it all turned out well – I look at my games and I still can’t believe that everything turned out this way.
There were big breaks after each game (10 mins).
I think it’s better to have a fixed start time for each tour. This is more convenient also for those commentators who stream matches.
How do you cope with the psychological aspect after missing some opportunity during the game? Does that influence you for some time or you just accept it and look towards the next challenges that the new position is offering?
Everyone makes mistakes. I try to forgive myself and always hope that the opponent will make a mistake in return. In many games, I played for a draw, but given my rating, opponents took unacceptable risks and gave me chances to correct mistakes.
What is the most important thing a chess player must do for chess?
Complex issue. I guess it's always fair to play and love them. And then the victories will come.
What is more important – understanding or knowledge?
Without knowledge, understanding may not help. I like to read books, literature, try to keep up with the theory of openings that I play.
What was the best advice given to you and what advice would you give to the aspiring players out there?
My husband always says: We must play all the pieces! My advice-it happens that the first move that comes to mind is the best. So if you see a good move-do it, do not waste time on doubts.
Do your thoughts have patterns (according to the knowledge) or you let the creativity/imagination work on its own?
I remember Mikhail Tal's advice: when I play creatively, the tram goes off the rails! It is better for me to play classic.
Can achieving nothing make a person happy? 
Winning a chess game can make a person happy! Moreover, it is not necessary to win a super tournament or be a grandmaster.
And final question –Do you think chess came to its point where nothing more can be invented and can we really know everything in chess?
Chess is inexhaustible! This is a fantastic game that has been, is and will be, despite the advance of computers.
You can replay the games here.
We wish Elena lots of personal happiness and professional success.