Summary of the General Assembly of the ACP and Polls

The General Assembly of the ACP took place from 12th to 26th of December 2016. All the Premium and Standard Members who were registered had the right to vote for approval of the the financial and presidential annual reports. These reports were approved by the majority (83.3%) of our members, showing their support for our work in the previous year.

The voting was conducted via a specially designed page by the ACP. There were also two polls – the ACP Poll and the World Championship Format Poll - that both the members and the general public were invited to participate in. Below you can see the summary of these polls.

The overwhelming majority of the ACP Poll were Grandmasters (73.17%). This was a very pleasing statistic as it gave an insight into the preferences of the strongest players.

The questions on the satisfaction from the work of the ACP were generally answered positively, mostly ranging from Fair to Very Good. The work of the current board was deemed better compared to the previous period of 2011-2015: Better saw 51.72% and Equal 41.38%.

The open-end questions provided additional information about the opinions of our members. For example, GM Michael Adams feels that the ACP had become more influential in recent years. Other members were quite satisfied with the work ACP did with the Veterans Program and the elimination of the infamous Zero Tolerance rule.

You can see the final results of the ACP Poll below:

The World Championship Format Poll was much more interesting to the public and here we had the vast majority of participants not being ACP Members (87.50%).

The preferred option for deciding a World Champion was by far a match (92.32%). Of those who wanted a tournament, the most popular option was an 8-player double round robin (58%).

You can find the complete results of the World Championship Format Poll by clicking on the image below: 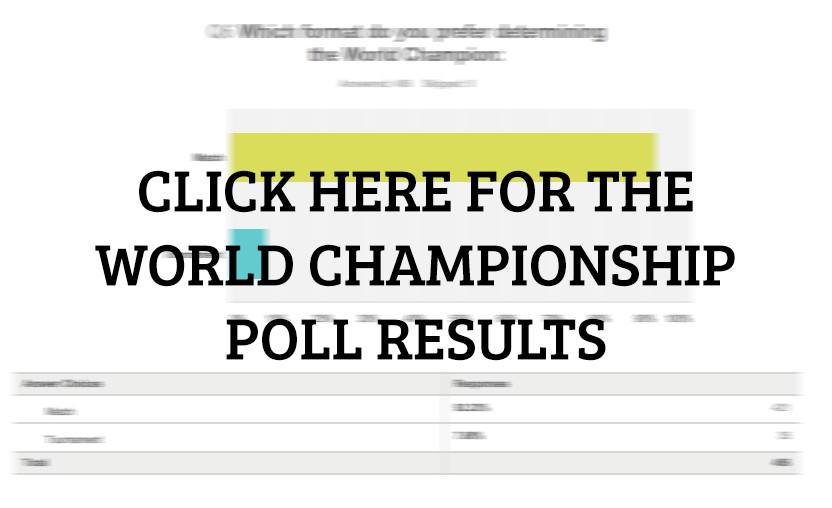